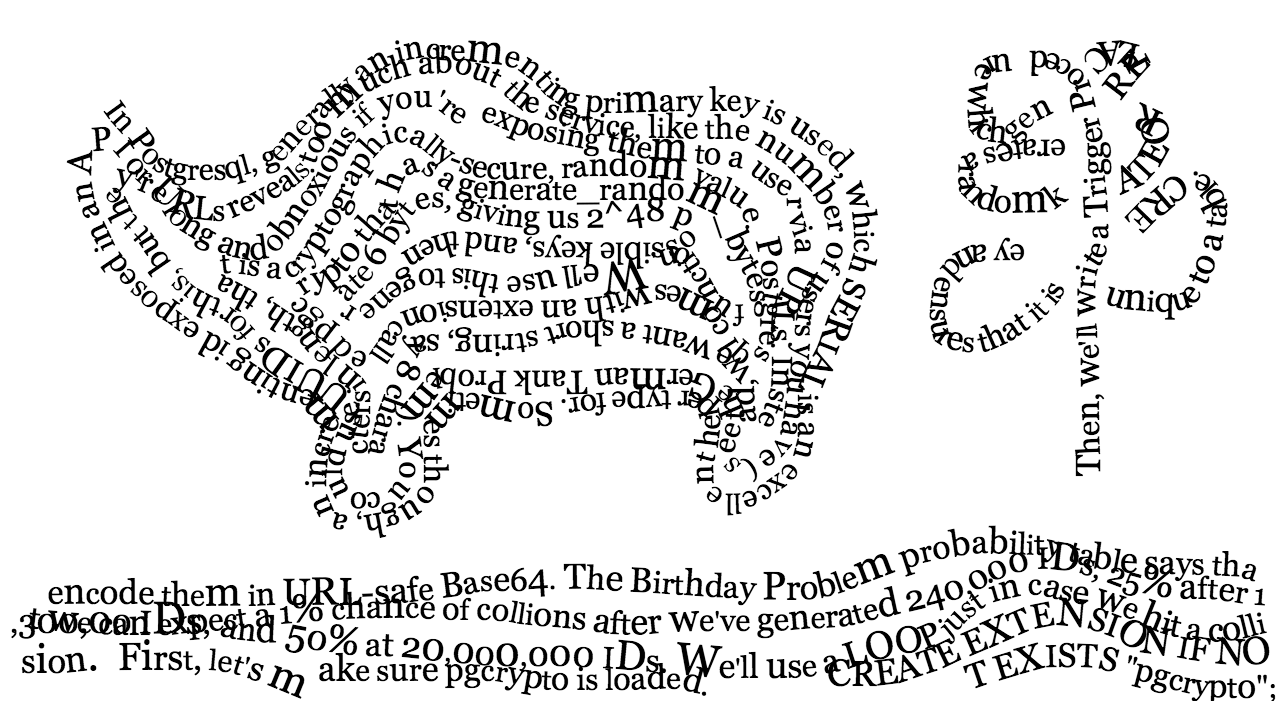 In Postgresql, generally an incrementing primary key is used, which SERIAL is an excellent helper type for. Sometimes though, an incrementing ID exposed in an API or URLs reveals too much about the service, like the number of users you have (see the German Tank Problem).

You could use UUIDs for this, but they're long and obnoxious if you're exposing them to a user via URLs. Instead, we want a short string, say 8 characters in length, that is a cryptographically-secure, random value. We need a cryptographically-secure generator because otherwise someone could guess the generator algorithm, seed the previous value, and we'd again be vulnerable to the German Tank Problem.

Then, we'll write a Trigger Procedure which generates a random key and ensures that it is unique to a table.

Replace id in the select, and NEW.id with whatever your PRIMARY KEY is called.

Now let's hook this Trigger up to a Table to execute whenever there is an INSERT.

You'll note that we want unique_short_id to trigger before the INSERT is finalized, so that we can replace the PRIMARY KEY.

Now, whenever we INSERT, our Trigger Procedure will run and generate a unique ID.

We've got short, URL-safe, unique IDs that we can expose in APIs and URLs that don't reveal any information and aren't cumbersome or ugly.

Update: @lancestout points out that there is a chance of producing swear words.
You could search a blacklist of words allowing for mutations, but maybe it'd be easier to encode it as hex instead of base64 with: encode(gen_random_bytes(6), 'hex'). The downside of using hex is that encoding 6 bytes takes around 12 characters.

If you'd like assistance in your web applications and APIs, let us know!